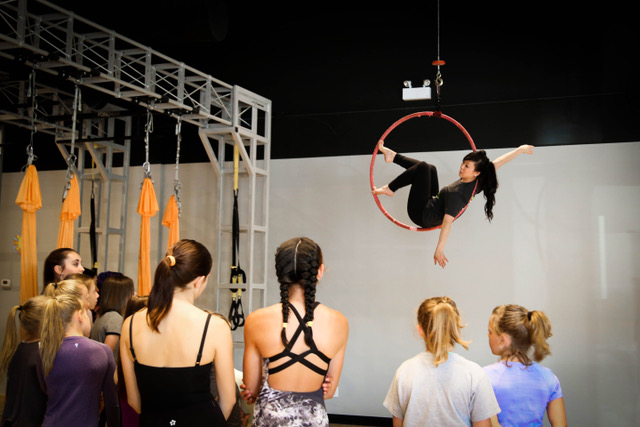 A Saskatoon aerial arts studio owner is creating a safe space for kids to discover their talents and achieve success.

Yuki Block opened the first aerial arts studio in Saskatoon in 2013, and she continues to inspire children and adults to “fly” regardless of their age or level of physical strength. On top of that, she is helping kids experience aerial arts, which is a unique and modern style of artistic movement and exercise.

Block believes creative activities have the ability to heal, and that there are many physical and mental health benefits. At Fly Studios YXE, the kids get to be totally free, they get to “fly”, and they inspire and motivate themselves for success.

“We have had kids who were the victim of bullying, and suffering from depression that found their place in the world in part through the arts,” she says. “In one case a parent shared with us that her child’s involvement in the arts may have actually saved her life.”

Fly Studios YXE is an Aerial and AntiGravity® studio that offers aerial experience to all fitness levels, starting from the age of five. The studio has been a service provider with Creative Kids since 2014.

Block found out about Creative Kids through a client who had inquired if she was a service provider with the program. She did some research about it, and immediately knew she should be a part of the organization. Currently, there are about ten kids funded through Creative Kids at the studio. Some of the greatest aerial artists the studio have developed over the past six years have been students who were able to take classes because of support from Creative Kids.

“The ability to reach into someone’s life and give them hope, purpose, passion, and joy may be the most valuable thing you can do for that person in terms of all aspects of their life.”

Block appreciates the efforts of the program for helping many kids pursue their passion, especially when funding for the arts is limited.

She goes on to say that Fly Studios YXE’s work is better because children funded through Creative Kids are part of the programming at the studio. “I can’t imagine doing this without these kids,” she adds.

The arts have always been a meaningful, and important part of Block’s life. She started as a figure skater at the age of two. Later on, she competed, toured and performed until she decided to study aerial arts in 2012.

“My parents were able to keep me in the arts as a kid, but it was struggle for them financially,” she says, “When I left figure skating and found aerial arts, my life was changed forever. I hope that others will have the same experience with the help of Creative Kids.”

She shared a testimonial from a parent whose daughter has been attending classes at the studio for two years now. “The parent said, ‘my daughter has grown so much during this time in so many ways. Her confidence, flexibility, her ability to reach personal goals and push herself to do even better than she expected are some examples. None of this would be possible if it was not for Creative Kids funding. I am humbled and very appreciative of this program. It makes life feel extra special and calm. I am grateful that she can have the opportunity to experience such a great class.  Thank you so much.’”